I’ve spent many hours now listening in real time to the audio timeline that I have partially reconstructed in Premiere (which I described in my previous post). I’m 21 hours, 48 minutes into the mission (plus the two hours of commentary leading up to the launch). There have been some segments of missing audio and there has been one 6 hour sleep period that contained only occasional Public Affairs Office (PAO) announcements.

The process is primarily about identifying the exact second that each transmission was made. 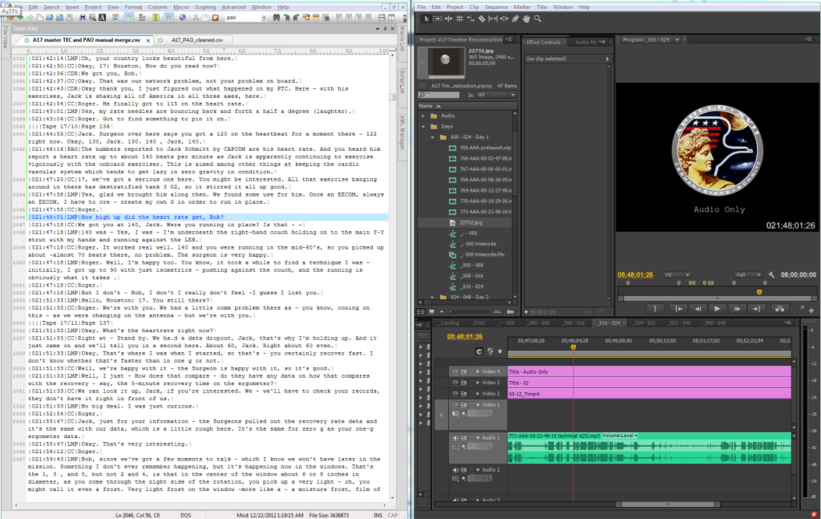 The screenshot above shows what the process looks like. I play the audio timeline in Premiere on the right while reading along on the left. When each transmission starts I pause and copy the generated GET (Ground Elapsed Time) timestamp in Premiere (top right of screenshot) into the transcript for that given line. This is also an opportunity to correct OCR and original transcription errors. For very garbled segments I switch over to the PAO transcript I also OCRed last spring to see if that original typist had a better recording (or better ears).

As I’ve read along I’ve come across segments where the astronauts mention shooting and filming different events. They also occasionally state still camera and 16mm film magazine numbers. This helps to identify when groups of photos were taken. I’ve done some additional research in the Apollo Image Atlas and have found that the magazine numbers they site are intact in the atlas, but each magazine contains hundreds of photos. The photo numbers the astronauts read out in the mission transcripts are not found in the atlas. It appears that the images were renumbered after the mission ended in order to give every photo a unique number (rather than magazine X, photo Y). Hopefully I’ll be able to find a catalogue cross reference somewhere that gives original photo numbers in addition to the numbers used in the atlas. This would allow me to place batches of photos on the timeline as well.

Listening to the audio and reading along is a lot of fun. It’s a very immersive experience that puts you back into the moment with the Apollo crew. The way they coolly and confidently work problems while they drive the mission forward is legendary. I’ve laughed out loud a few times, like when I came across the excerpt below.

Play the audio below while you read along for an idea of what this is all like. It starts off with Jack Schmitt verbally describing to the Mission Control CAPCOM, Bob Parker, the weather patters he can observe on the Earth as they coast towards the moon.


|005:52:25|LMP|I’m distinguishing the pack ice from clouds mainly by the angularity of the patterns within them. There is no good clear color or albedo distinction. So, I could – I could be looking entirely at clouds, but I suspect there are some pack ice patterns, too. I’m not keeping you awake, am I, Bob?
|005:52:53|CC|No, sir. Just keep talking; we’re listening. And I’m sure not much of the world is listening, but this will all be recorded, and you can read it all when you get back and think it through and tie it up with the pictures. And I’m sure there’s going to be people interested in this. And we’re interested ourselves; just keep talking.
|005:53:11|LMP|All I want to do is read what I say.
|005:53:14|CC|Roger. If I had a little more geology training, I’d be asking you some better questions. I’m afraid, right now, I can’t think of anything to ask you.
|005:53:21|LMP|Well, I can’t – I really wish I knew that geography. I don’t know – I wish I’d thought of bringing a good map of Antarctica.

Bob Parker can take the fact that I’m working on this project 40 years after the mission as proof that he was right about how interested people would be in this. I’m interested.

I’ll keep working on this as time permits. It’s like reading a very, very long book. I am on vacation right now after all.