It has been a month or so since my last report on my progress. I have been making consistent headway on correcting the transcript while reassembling the timeline in Adobe Premiere as I go. As of today I’ve corrected the transcript to 112:46:30, which is just after they landed on the Moon and got the GO to stay there.

If you take a look at my project on Github you can see my progress in detail. 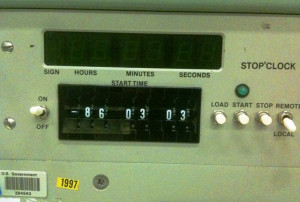 A few items have come up as my correction effort has progressed. One big one is a somewhat complex time change that occurred during the mission to account for launching late. The bottom line is that the mission had been planned to arrive at the moon at a specific time. Everything from radio coverage to the angle of the sun’s shadows on the Moon were all pre-planned. Launching 2 hours 40 minutes late meant that they needed to make up time. When Apollo 17 executed their Translunar Injection Burn, they burned it a little longer than planned in order to speed up their trip to the moon to make up the lost time. They did this very accurately so that the minute they arrived would be the exact minute in the Mission Plan.

Here is the somewhat detailed explanation given by the NASA Public Affairs Officer during the mission:

Here in Mission Control, the Flight Activities Officer has been actively involved in figuring out how in the flight plan we’re going to make up for the 2 hours 40 minutes difference from the flight plan liftoff time and the actual liftoff time. One of two things happen when you lift off late for a mission. Either the events that are called out in the flight plan occur at a different Earth time, Central Standard, Eastern Standard, or Greenwich Mean whichever reference you happen to be using, or the elapsed times change. And the flight planning is all done in terms of elapsed time for the most part. Events that are called out in the flight plan are listed by the amount of time that has elapsed from liftoff. At the present time, in the Apollo 17 flight plan, the amount of time that has elapsed since liftoff is unchanged from the pre-mission flight plan time. However, as, by the time we have approached or reached the Moon, because of the speeded up translunar coast time, occasioned by slightly faster or slightly greater amount of energy that was put in during the translunar injection burn, we’ll have to make up 2 hours 40 minutes. In other words, we’ll be arriving at the Moon 2 hours 40 minutes earlier than flight plan allowed for. This means that all of the events that are called in the flight plan to occur between now and lunar arrival have to be accomplished in 2 hours 40 minutes less time than the flight plan allows for. This creates no serious problems, because it’s a relatively quiet period of the mission. It’s very easy, by adjusting sleep period slightly and moving the activities up to accomplish it. However, the flight planning officer, flight activities officer, prefers to accomplish this shift in two increments rather than a single one. And this could be likened to a change of daylight savings time, where you don’t want to make the jump too big at once, and you might start interfering in a way that would be noticeable, say, with sleep periods. But by accomplishing it in two segments, the change is relatively insignificant. And what this amounts to Is that at two different times in the flight plan, we’ll read changes to the crew, and they will go down the flight plan, moving a series of events approximately 1 hour earlier. The second time that this is done, they’ll actually be moving events 1 hour 40 minutes earlier and at the same time, we’ll update the clocks in Mission Control, the Ground Elapsed Time clocks, which serve as the key to where you are in the flight plan to agree with the changes we have made in the flight plan. And from that point on, the GET clock will be back in synchronization with the flight plan. This clock update is presently scheduled to occur at 66 hours Ground Elapsed Time, rather at 67 hours 40 minutes Ground Elapsed Time, and we’ll move the clocks to 66 hours.

This time change means that my Premiere timeline reconstruction has to account for it. However, the TEC transcript created in 1973 did not account for it. All of the mission times in the original transcript are 2 hours 40 minutes off after 067:45:02 (the mission time where the clocks were changed). Rather than correct every single line by 2:40 while correcting the transcript, I will do this programmatically in a later processing step. Later, I’ll simply write a Python script that adds 2:40 to every GET timestamp after 067:45:02. This is another example of how making the transcript data well-formed and programmatically manipulable is helpful.

Another problem introduced by this time change is that the Premiere project is structured using the original Mission Elapsed Time, so segment names will be off by 2:40 as well. I’m already planning to fix up the timecode displayed in Premiere (possibly by using a dynamic link with After Effects). During that later stage I may wind up refactoring the Premiere projects structure to properly reflect the Ground Elapsed Time change described above. This sounds time consuming but will be nothing in comparison to the total time I’ll have already dedicated to this project.