There are two different air-to-ground transcripts associated with the Apollo 17 mission, the TEC or Technical Air-to-Ground transcript, and the PAO or Public Affairs Office transcript. These were both separately transcribed to typewritten pages in 1972 even though they contain 80% overlap.

In April of 2012 I decided that in addition to the TEC transcript that I had already spent months on, I would also need to OCR the PAO transcript. 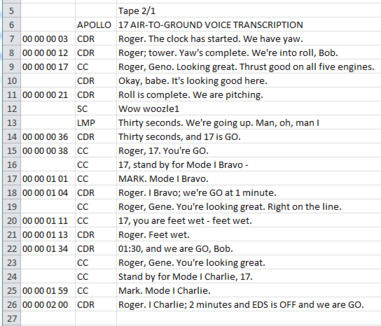 Consider these two OCR outputs. The top is the first page of the TEC transcript, the bottom is the same content from the PAO transcript. The PAO voice-over cuts over many of the communications between the astronauts and the capcom, and the transcribers interpreted many of the statements differently back in the 70s. There are very few timestamps in the PAO transcript, usually only the page title contains a general mission time when things occur. Establishing when each thing was spoken is going to be a lot of work. 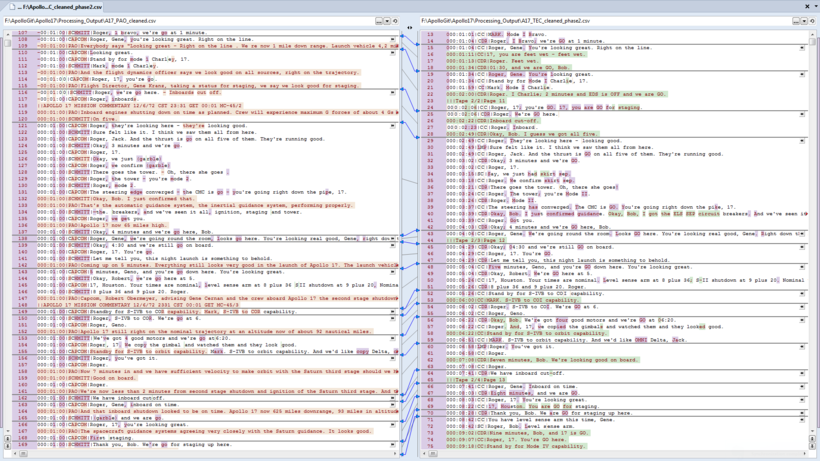 I’ve skipped ahead here to show you the above image. It’s a good visual representation of the marked differences between the TEC data and the PAO data. Reconciling the two would be unworkable and unnecessary in most instances.

It appears that a lot more diligence went into the TEC transcription, and it’s quite possible that the recordings they were transcribing from were cleaner due to not being processed through the public affairs office. This is just a hunch on my part, but I’ve decided to make the TEC transcript the authoritative master and only use the PAO as backup when information is missing, and for extraction of the PAO commentary to include in the master.