There was a recent article in Marketing Magazine about a new effort to convince Calgarians to immigrate to Regina Saskatchewan. This struck a chord with me because I was born in Calgary and spent the early years of my life in Regina. Regina has always been “home” to me. My grandparents lived there, and as I moved from place to place we would always make time to return to Regina, our home plate. I now live in Toronto. 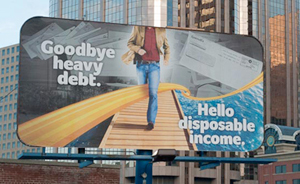 I found this idea of west stealing from west quite interesting. As someone who lives in the east who visits the west often, I’m fully aware of that cultural divide. This appears to be either the invention or the illustration of a new divide.

As I dug into the campaign I quickly realized that the supporting website (HelloRegina.ca) was less than stellar. It’s brocheur-ware at its most shallow. The site’s design and photography are as shallow as one would expect, but what really struck me was the use of pseudo-statistics to try to quantify their marketing position. Here are some examples:

All this statistic really means is that Reginans are more likely to rate their quality of life higher than in Canada’s largest cities. This could be negative. It could mean that Reginans are more delusional or more unaware of what they are missing. In effect it means they’re more content. In places like Toronto that (for better or worse) have a much more “driven” population, which is common among cities on the easter seaboard of the US, it follows that they might be less content and more likely to rate their quality of life lower. 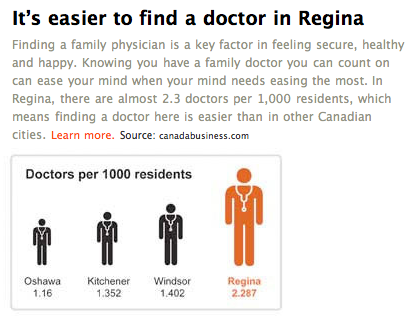 Is the ability to find a doctor one of the top 10 reasons to move to Regina? Really? How far down the list of statistics did they have to go before they found this one? I think the sense of desperation conveyed by this statistic goes against the overall campaign promise. 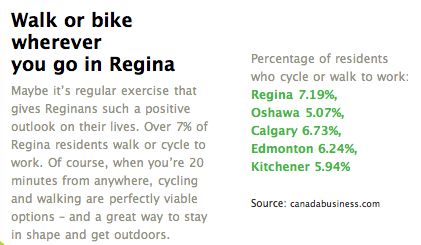 Biking is fantastic, and I’m sure it’s a great reason to live in a smaller city. But I don’t understand why they felt the need to add statistics to support this point. The list of compared cities is unforgivable. Calgary and Edmonton are just as cold as Regina in winter and are much more sprawled making them an unfair comparison. This leaves Oshawa and Kitchener. Oshawa is a declining blue-collar auto manufacturing town that has turned into a bedroom community for Toronto. Of course you don’t ride your bike to work if you live in Oshawa, you work in Toronto. Kitchener’s a weird one, and I’m not sure why this statistic would be lower there, but they obviously chose it simply because it was lower. 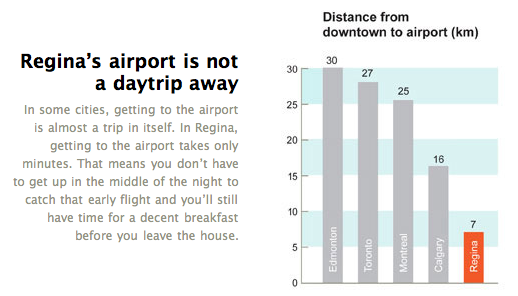 This one is the icing on the cake. If anything this is a disadvantage. If you live in Regina you aren’t leaving it. However, if you’re commuting to Regina from Calgary (as is more often the case) then this is an advantage. This one is special to me too because my grandparents lived right under the flight path of runway 31. My sister and I would dive under the water in their backyard pool to escape the noise of the jets.

Obviously this campaign is a bit of a reach, as any Canadian knows. It has been more and more difficult to attract new people to smaller Canadian cities with aging populations and reduced local business economies. Still, I’m sure that somewhere in the mishmash of these bent statistics and strange marketing positions there’s a compelling reason why a Calgarian might want to move to Regina. Regina is a lovely place. There has to be truth in advertising, at least sometimes, but this campaign misses the mark.
Tweet
« Home Sweet Home
DIY 5-in-3 Hard Drive Racks »